I went to the moon and back one weekend in June. That’s what Marfa, Texas reminded me of as we were landing on this vast lunar-like landscape. I went from not knowing this town existed to being obsessed with wanting to visit and find out what the hype was all about. I felt like I was in the twilight zone, a good twilight zone. When we drove into the little town of Marfa, 5 miles from the airport, I felt immediately transported to an alternative universe. Marfa is not easy to get to…you really need to want to go! The closest city is El Paso, almost 3 hours away. Austin is a 6.5-hour drive. Typically, Marfa is a stop in the middle of a road trip or people fly in by private plane. There is no commercial airport. The population consists of local ranchers and cowboys, international art lovers, a few very cool celebrities, including country singers and actors, bohemians, people who want to escape the real world, people who are not afraid to be alone or get to know themselves intimately, truckers driving through, and of course the handful of people born and raised here.  What you won’t see are timid tourists who don’t know how to appreciate “rough around the edges” adventures.  The landscape and sky are mesmerizing. Where the one ends the other begins. They work together in creating the most beautiful ever changing intangible piece of art.

A few of my favorite moments in Marfa: 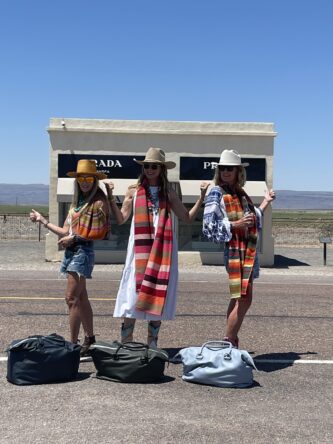 I was only in Marfa for 48 hours, so my time was limited and precious.  My absolute favorite takeaways were spending cowgirl time with my tres amigos, slowing down and adapting to the stillness, watching my husband give in to the relaxation, and finally, discovering a place that gives everything and nothing at the same time.  A trip to Marfa asks that you find the connection and embrace the space.